Made a rare appearance in last night’s Bodonkey

We rushed back from smokkee’s brother’s house after Thanksgiving dinner to play in the Bodonkey.

I haven’t played in a while so I was a bit rusty. I lost a bunch of chips early on with QQ vs. AA. Fortunately, I didn’t go broke with it and was able to stick around a while. After limping too much and hanging around pots I had no business being in, I found myself with about 700 chips.

I then looked down at AK.

Love_elf’s poker tip of the day: don’t min-raise AK in a blogger game then shove on a low flop into another player’s set of 2’s.

I don’t get to play that much and even though I was unlucky a couple of times, I still had a fun time.

Smokkee won $100+T$109 for 1st and sits atop the leaderboard after 10 tournaments in the Bodog Blogger Series II.
Posted by Love_elf at 10:32 AM No comments: 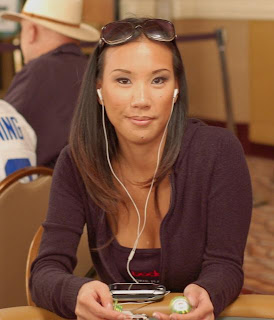 This blogger tournament series is open to poker bloggers worldwide and runs on Tuesday and Thursday evenings at 9:05 PM ET.

More details are available at the official blogger series site at http://www.bodogbloggertournament.com/

Just what is Bodog's 100K Guaranteed Tournament? With one of the biggest overlays in the industry, the value of this tournament is literally unbeatable!
Find out more at http://poker.bodoglife.com/tournaments/100k-guaranteed-tournament.html
Posted by Love_elf at 4:17 PM No comments:

Last night I worked until about midnight, came home and watched a movie with Ray. Actually 1 and 1/2 movies. Went to bed around 3am. Silly, huh? I had to get back up at 6am to do some work (I'm on call). After I worked, I called my sis to do a webcam with her and my precious nephew. His 2-yr birthday was Thursday and they are having his party today. Ray and I got him a play kitchen. Ray thinks it's too girly, but I think it's fine. He loved it! He's so inquisitive and easy to please. I'm lucky 'cause I get all the good stuff and don't have to deal with the bad stuff - all the "no's" and "I don't want to's". LOL

Anyway, I went back to bed after this and slept until noon.

Stories of an Intern...part I

Last week I was doing an intake interview with a man who is severely depressed. His depression began about two years ago when his father died from multiple strokes. He became unable to function to the point where he lost his business, his wife and his house. He started drinking and wrapped his $90K car around a tree. At present, he’s homeless. And depressed. And suicidal. As I’m sitting in the room with this man, I’m feeling totally incompetent to help him. What do you say to someone who says “I want to die.” He literally almost threw himself in front of a train 3 weeks ago. The only thing that saved him was his daughter. He thought of her. He did not want her to go through the loss of her father, like he had lost his father. Oh – and about 6 weeks ago he got a brief construction gig. While at the site, another homeless man and former inmate started a fight with him. The inmate won. Big time. My client suffered a concussion and needed several stitches.

This is just one person’s story I’ve heard since starting this internship 2 months ago.

Another client was molested by her sister when she was 7 years old. This continued for over ten years. She was beaten by her older sister too. As adults now, they are estranged.
But the younger sister decided to invite her older sis over to spend the night with her kids. They both have kids now, and her intention was for the cousins to have a play date/sleep over. The two sisters ended up in the same bed. Normally, this is fine. This is what sisters do. However, in this case, it was not fine. The older sister, now in her late 30s, tried to molest her younger sister again. Can you believe that? The worst part of the story is that the older sister has children….

A client of one of my professors comes to therapy with a severe history of sexual and physical abuse. She was molested by her brother beginning at age 9. This went on for about ten years. At one point, she got pregnant from her brother and had a miscarriage. Her mother died when she was about 5 years old. Her father remarried shortly after and the new wife beat this little girl senseless. She still has scares on her face from the beatings. She eventually left the home and got married to a man that was abusive in every way. One night she left him and went to her father’s home, 2 kids in tow, bloodied and battered. Her father turned her away saying “you made your bed now lie in it.”

Pretty heavy stuff. I always knew this stuff existed. But have never been faced with it live and in person. Hearing the stories of the beaten, the battered, the depressed and the lonely certainly has an effect on a person. It’s just so sad what human beings do to each other. I’m not surprised by anything anymore. Well, not much. I know I haven’t heard it all. Every day brings new stories and new discoveries. As I travel this journey, I learn the most about myself. What I can handle, what I can’t, and what I won’t even consider working with. I’m learning how to help people cope, how to communicate with them in a way that no one has ever communicated to them in the past. It can be life changing. It’s all very fascinating really. How people survive. Sometimes, when someone is bitching to me about something stupid, I just look at them and think “it could be so much worse.” The things that people go through. It really gives me a perspective about my own life. I feel so lucky. Yes, I’m exhausted and frustrated at times, but that’s nothing. Nothing at all.
Posted by Love_elf at 7:07 AM 1 comment:

To Vegas or not to Vegas?

Ray and I are undecided about going to Vegas in December.
On the one hand, I will have just finished this semester in school and would really love a visit to the spa, doing some shopping, ect. (hopefully no more "shoe incidents" like last time).
But on the other hand, If we go, I'll want to stay someplace nice and Ray will play poker, and we'll want to fly of course....eventually costing us several hundred dollars.

So, we're undecided. Who's all going from blogger land?
I've been pretty out of the blogger loop lately and would love to see everyone!
Posted by Love_elf at 11:22 AM 2 comments: