I was trying to decide between an angel or a witch. Turns out, the witch costume was more "appropriate" for handing out candy, according to the hubby. bla bla bla... 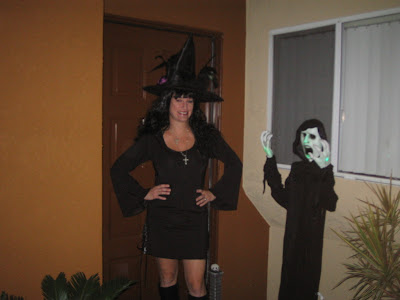 Well, we are smack in the middle of another Chargers season and it's time for the annual Charger Girls favorite picks!

Victoria is a rookie on the Chargers Girls team this year, and my top pick. She is originally from a small town in the Midwest and grew up attending dance and cheer classes, with the hopes to one day perform professionally.

Second pick is Ashlie. She is originally from Huber Heights, Ohio. My Homie!! She is enjoying her 3rd season with the San Diego Charger Girls. Her favorite events to participate in as a Charger Girls member are those that benefit American troops. Her most memorable of these events was performing in a USO Concert at Camp Pendleton last season. Ashlie is serving her first year as a Charger Girls team captain and is thrilled to be back for another season.

3rd place: Casie. She is a San Diego native enjoying her 3rd season with the San Diego Chargers. What a hottie!! Casie has experienced some unforgettable opportunities as a Charger Girls member. In 2006 she competed in NFL Network’s “NFL Cheerleader Playoffs” where she and her teammate earned the title of ‘Best Cheerleaders in the NFL’. Casie loves being a Charger Girls member because she is a diehard football fan!

4th place: Katie, as she likes to be called, is also a San Diego native. She is a huge Chargers’ Fan and proud of it! She is a rookie on the Charger Girls team and is thrilled to be performing for Chargers’ Fans in her hometown of San Diego. She considers herself an “outdoors” person. There is never a time when she will pass on camping, water sports or snowboarding.

These are the picks for this season, but you can check out more hotties on the Chargers website. Oh - and don't forget to check out the Charger Girls Calendar this year!

"Do these announcers ever shut the fuck up? Don't ever say stuff just because you think you should. That's the definition of an asshole."

Oh! And I played FSL Sunday's with Dr. Pauly.
Here's how I did:

I played some poker this morning for the first time in a while. It didn't go so well. LOL - I think I overplayed Jacks: 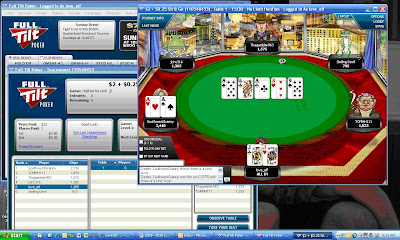 So it's back to the basics for me! I think I need to relearn how to play texas holdem. I mean, I was out of this game in record time. It's embarrassing really. But, I guess skill only comes with practice. And the luck? Well, that seems to only come once in a blue moon!