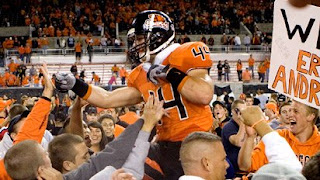 So much for the Pac-10 being No. 1 USC's personal stomping ground. Oregon State shook up the BCS on Thursday night by upsetting USC, building a 21-point halftime lead before holding off the Trojans 27-21.
Posted by Love_elf at 10:31 PM 1 comment:

Can they do it? 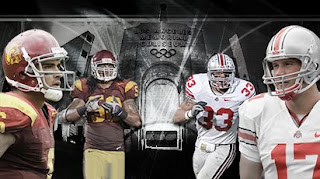 Most everyone says that Ohio State has no chance tomorrow. I say they do.
After all, everyone loves an underdog, right?

Lots going on, peeps! Ray and I went to the Chargers game last Sunday. They ended up losing to the Panthers in the last 2 seconds!! Ugg....
For a complete game recap, go here. 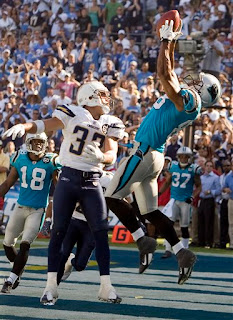 It was a good day though. We saw our "homies" - our other season ticket holder friends. Does anyone out there have season tix to anything? Isn't it great the comradery you build between your fellow fans?

Also, the BIGGEST GAME of the year is coming up the Saturday!!
I know USC is underestimating the Bucks. But, so are a lot of people.
Just watch our offense boyz! ya, that's them, racing past you as you wonder if the ball has even been snapped.
Good catch, Mr. Wells. Nice pass, Mr. Boeckman. 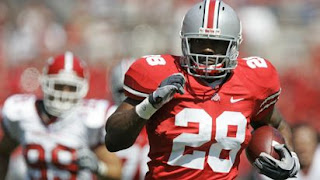 There is NOTHING like a Buckeye win!
Oh, and I'm playing the Fantasy Sport Live again this football season.
So far, I'm holding my own in 14th place, but have to do better!
Hopefully next week, I'll catch up! 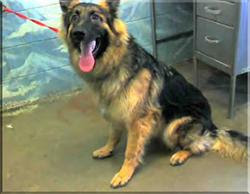 Coastal exists solely because of your tax deductible donations, which support our efforts to save these very deserving animals. Please donate today and help us save German Shepherds.


Special Funds Needed! Often, the decision to save a dog's life is determined by our ability to pay their medical bills, which is very disheartening.We have not been able to assist as many medical cases as our hearts have wanted to over the past couple of months due to a depleted medical fund.

We rescued Andy on his very last day, not knowing that he was very sick.
Our Boy Andy Has Pnuemonia!

Andy was rescued from a high-kill animal shelter on Friday and was quickly diagnosed with severe pneumonia. He is receiving oxygen treatments, IV antibiotics and fluids. He is initially responding, so we are very hopeful. However, we have already incurred bills of over $3000 for the first couple of days. Please help us in any way you can!
Please make a donation to help Andy!

Andy is fighting for his life!
Can you please help?
Posted by Love_elf at 12:46 AM No comments: